Maximizing Efficiency With a Home Energy Audit in Peoria, AZ 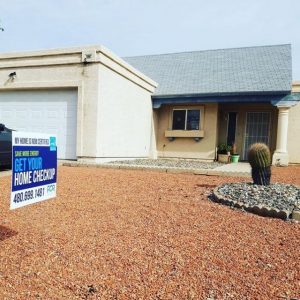 When summer hit its stride and daytime temperatures climbed above 110°, John C. knew that something had to be done about his energy usage. Peoria city officials encouraged homeowners to invest in a home energy audit as a way to save some money while making environmentally sustainable choices. For John, this sounded like a win-win. Without further ado, he reached out to the City of Peoria’s trusted partner: FOR Energy.

After a bit of scheduling, a team of Energy Pros from FOR Energy drove out to John’s house to conduct his home energy audit. They reviewed his utility bills and systematically checked his house for any inefficient points, looking at windows, doors, insulation, and ductwork. They even conducted thermal and appliance tests, covering all of the bases when it came to potential sources of energy loss. When they finished, they sat down with John to talk through their findings. He noted that energy-saving fixes, “were recommended in order of a payback,” enabling him to make smart home improvement decisions that would work for his household.

While John C. wanted to make his home more energy efficient, he didn’t possess the budget for extensive renovations. The team at FOR Energy listened to his concerns and used his home energy audit findings to present a plan that would maximize energy efficiency while staying within his budget. After receiving John’s approval, our Energy Pros sealed outlets and air ducts, preventing any cool inside air from escaping the house. They also applied window film, protecting John’s home with an invisible thermal shield that would still allow him to enjoy the views.

Throughout the entire process, John noted that our service remained unparalleled:

“Window film, ducts, and outlet sealing all done in one day; courteous and professional work too.”

When they finished, our team of Energy Pros cleaned up after themselves and left John to enjoy his cooler, more efficient house.

John C. was so happy with the service provided after his home energy audit that he decided to budget for additional improvements to be completed in the future. His final verdict:

“We would recommend FOR Energy to our neighbors.”