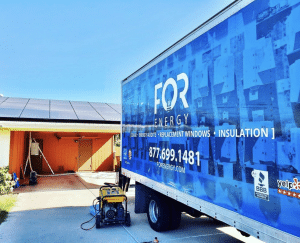 As temperatures climbed, Ed M. wondered whether there was a way to beat the heat in his Scottsdale, Arizona, home without paying the price for overworking his HVAC system. He’d recently heard about the local home energy efficiency experts at FOR Energy, and, after a bit of thinking, he decided to reach out and schedule a home energy audit.

A team of Energy Pros was quick to visit Ed’s home to complete his scheduled energy audit. They examined windows, doors, ductwork, and insulation, and they used thermal imaging technology to see where heat was seeping into his living areas. Ed was already impressed with their thoroughness, but the FOR Energy team was just getting started.

Ed appreciated it when the Energy Pros presented him with a comprehensive report on his home energy efficiency. In the end, he decided to prioritize updating his insulation, re-sealing the AC ducts, and adding UV-blocking film to his south-facing windows. The team finished his home energy audit by scheduling the updates for late May.

On installation day, the crew arrived as scheduled. While this particular project was one of the rare instances where the Energy Pros took longer than expected to finish their work, Ed was quick to note that:

“It was clear that the delay was caused by their own pride of work and attention to detail, and ultimately it was well worth the extra few hours.”

With their tasks completed to perfection, the FOR Energy team cleaned up after themselves and left Ed to enjoy his newly efficient Scottsdale home.

For Ed, the proof has always been in the pudding. He kept an eye on his SRP bills, comparing his energy usage before and after his home energy audit. Much to his delight, he found that he was paying 30% less after upgrading his home energy efficiency. This prompted him to reach out to FOR Energy again, saying:

“I’m very pleased with the results…I’m happy to recommend their services.”

We’re happy too, Ed, and we hope you enjoy your comfortable Scottsdale home for many summers to come!