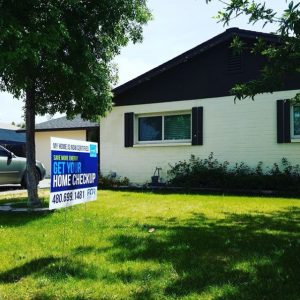 With one of Arizona’s long summers dragging on, September O. felt ready for a change. She knew her Tempe home wasn’t very energy efficient, and during the hot months an inefficient home could mean the difference between enjoying air conditioning and suffering through stifling heat. So September reached out to FOR Energy to conduct a home energy audit.

Led by Jermain, a team of trusty Energy Pros from FOR Energy drove to September’s home and tested it for any inefficient points. They reviewed utility bills, checked windows and doors, evaluated insulation and ductwork, and conducted thermal and appliance tests. After they finished the home energy audit, Jermain sat down and explained their findings. September notes that he,

“ … was absolutely wonderful. His service provided was both friendly but detailed and accurate.”

Acting on Jermain’s data-backed recommendations, September decided to have the team complete some upgrades.

Based on their findings during the home energy audit, the FOR Energy team blew new insulation into September O.’s attic before sealing both the attic and her air conditioning ducts. She noted that the installation team provided stellar service, taking pains to clean up after themselves so that they interrupted September’s day as little as possible. Their service and her savings were so impressive that September later reached out to the team for solar panel installation.

Throughout the entire process, September noted that the FOR Energy Pros took pains to keep her updated so that nothing happened in her home without her approval. She even offered the following positive feedback:

“Shout out to Daven and James for being so great and friendly as well. Showed me pictures and explained everything they were doing before, during and after!”

With her home energy audit completed and her Tempe house upgrades in place, September O. took to Facebook to express her gratitude and recommend the service to others. She wrote:

“You won’t regret the home energy audit and have nothing to lose!”

We couldn’t have said it better ourselves.